The Nokia X20 features a 32 MP front-facing camera, cut into the screen in a fairly large hole with fixed focus and Full HD filming. At the back we find a circular camera, with Nokia 8.3 and Nokia 5.4 style design. It brings us Zeiss optics, LED flash and Full HD filming only at 30 or 60 FPS. The main sensor is a 64 MP one with PDAF and it is joined by a 5 MP ultrawide camera, where we would have liked to see an 8 MP one.

It also has a 2 MP Bokeh camera and a 2 MP Macro camera . Camera features include Dual Sight, which allows you to capture video simultaneously with the rear and front cameras. We also have a cinematic capture mode, capture at a maximum resolution of 64 MP, but also Night Mode and a special stabilization mode. Note that the Cinema mode also blows wind for better acoustics. We also have Slow Mo, Macro, Timelapse, Pro (with RAW capture) and Panorama.

The photos of the day are taken in the IOR Park in Bucharest in hot weather in mid-July. I can't help but notice an intense green and whitish subjects in the distance. Dynamic range seems limited to me, the camera does not know too many shades of color. There is also a feeling that the images are infused with a kind of "sepia" or white. Regarding the intensely colored vegetation, we are better off than the recently tested phones under 1000 lei Redmi Note 10s and Redmi Note 10 5G. The ultrawide camera seems to lighten the shades and distort the subjects on the periphery of the image, which is especially visible on people's faces.

Selfies are a bit "former", not very well focused and inconsistent. You don't see the pores, at least in the shade. The Bokeh selfie capture looks good though, every feature or laughing expression is accentuated, and the eyes are shiny, expressive. I was about to praise the separation of the background, but I saw a tree get rid of the blur behind me. If you get too close to the camera, focusing will fail. In the 2 series of selfies, the frames are sunburned, both my face, especially my beard, and the background behind me. The facial hair seems to be drawn with a pencil in these conditions, but I can't help but appreciate the luster of the look.

You can forget about ultraviolet catches in the shadows, the light will be amplified at a great distance, with an ethereal halo . On the other hand, the photos with toys in the park are good for color, details, textures. I mean the blue motorcycle, the red car, or that mushroom. Nokia X20 seems to do better in close-up than in the distance. 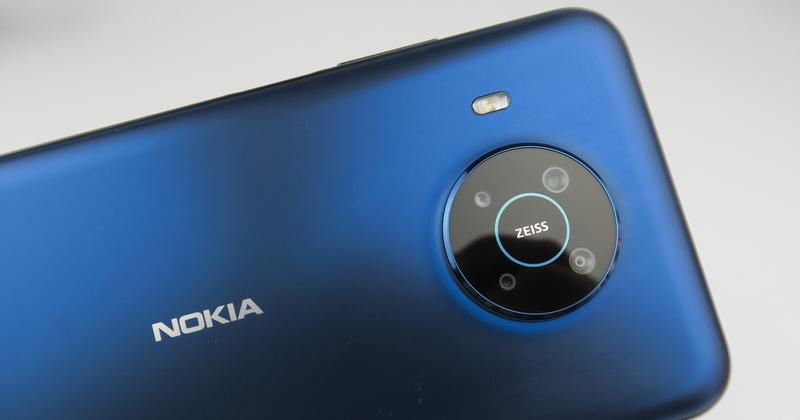 We also have closeups and Macros with metal taps, toy buttons and I seem to prefer closeups. In addition, the macro brings only a palpable texture of the metal teeth on the faucet. Bokehc u main room is successful, cutting that statue effectively against the background. Its texture and expressiveness are also amplified.

I also tested the Zoom on that bike sign and I'm not too impressed. Things are OK around 2X, but there's a lot of noise beyond. It seemed like Huawei P40 Lite was better. Landscape capture often results in an overly white sky and a discrepancy between areas that are too light and too dark, there is no good balance here. The ultrawide capture shows from 2014 to the pictures of the landscape with the lake.

Bonus points though for the catching wasp catches, seen in all its splendor, with hairs closeup, more so than Macro.

At the end of the gallery I have correctly colored photos with Muppets toys, a Bokeh with a Big Bird correctly made and a closeup with Elmo's eyes perfectly focused. Plus a rose that looks more purple than red. I would put the camera during the day between Redmi Note 9 Pro and Galaxy A51 , this with indulgence. Much weaker on ultrawide and Macro though.

For night photos we move to Timisoara, where they seem to be a more impressed idea of ​​the results. The camera captures quite a bit of light, the clarity is OK, we also have details. Forget about ultrawide shooting, which seems to be done with a "haze", a fog on top, and you can't see anything on the side. The photos from The Rat Pub with Night Mode look great though, compared to any other midrange phone on the market.

Later we would take other quality photos, look at the details of the tiles and buildings of Timisoara . Slightly intense yellow, but the halos of the lights are well kept under control. Poor zoom, but good focus. Night Mode also shows you the blades of grass in the lawn and makes the sky a little exaggerated blue though. If you are a tourist and want architectural details, there is practically no point in taking other types of pictures than this.

The Catena frame without Night Mode is a bit foggy and the details of the buildings in the back are more modest, so Night Mode is life!

We got to filming and whether you like it or not, the stabilization of filming on the go is not bad at all . He even went downstairs quickly. It's a slight "strafe" move, a right-to-left game like the Unreal Tournament, but I don't find it very annoying compared to a flicker. The cinematic filming injects some species into the frame as if, and the ambiance has always been well captured by the microphones, without problems with the wind for example.

Unfortunately, the sky is a bit white, unrealistically white. We also have a lot of overexposure, burned areas, and the crown of trees in the distance does not abound in details . Exposure adjusts OK when panning, but there's nothing special here. I can appreciate that we have a smooth zoom, but details are quickly lost.

The colors of the toys look realistic in the shade, and the viewing is quite stable. Dynamic range is limited and light is captured excessively for areas outside the shadow. Selfie filming reminds me of video capture by Samsung camera watches, that's all I can say. Ozo Sound Capture seems to be doing a good job, I still have a podcast voice. The girl is too "soft" and poorly focused and without details.

The focus test is brilliantly passed, although it's a moment, an extra second to focus on Samsung phones. I also have a dual capture, which seems to have lengthened my face and made it too white, but what I caught with the rear camera is not bad, even if it has the exposure given one degree higher. The colors of the Muppets toys also look good, and the over-lit areas of the park are immediately leveled when panning to the right.

The lack of 4K does not seem acceptable to me in 2021, and at 60 FPS you have a better chance of burning the whole frame.

The night filming doesn't work out at all: shaky, noisy, too yellow and gray in places, with an inexplicable purple hue on the pavement. And the microphone is the only star here, and I think it remains the only asset in filming. Unfortunately, this phone is filming how we would not accept even at a 900 lei terminal.